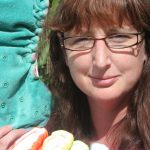 The Nappy Laundry Company based in Stonehaven, Aberdeenshire has won a Green Apple Environmental Award in the national campaign to find Scotland’s greenest companies, councils and communities.

Competing against more than 100 nominations in the Scottish Green Apple Awards, business owner Nicole Hepburn will be presented with a trophy and certificate at a glittering presentation ceremony in Edinburgh Zoo on September 2.

Environmental Minister Paul Wheelhouse is expected to present the awards.

The Nappy Laundry Company was set up almost 6 years ago in response to a rising demand for cloth nappies and a laundry service in Aberdeen and Aberdeenshire.

Over the years since it started, the business has prevented around 45 tonnes of disposable nappy waste going into landfill by offering parents an alternative to throw away nappies.

Business owner Nicole Hepburn said: “We are delighted to have received this award. Over the last five years cloth nappies have become easier to use and more and more parents are realising that it is a great alternative to disposables, not only is it better for your baby and the environment it is also kinder on the pocket.

“Cloth nappy users can save as much as £700 per child and in the current economic climate more parents are turning to cloth.”

The Nappy Laundry Company is the only independent cloth nappy retailer and laundry in the North-east of Scotland.

“We are not just an online shop and laundry we offer parents the chance to try cloth nappies free of charge through our nappy lend scheme and we also offer a newborn nappy hire service.  We also do talks about the benefits of cloth at local groups for mums-to-be and new mums,” explained Nicole

Last year they were awarded the Green Butterfly Award by Aberdeenshire Environmental Forum.

The Green Apple Awards began in 1994 and have become established as Britain’s major recognition for environmental endeavour among companies, councils, communities and countries.

The awards are organised by The Green Organisation, an independent, non-political, non-activist, non-profit environmental group dedicated to recognising, rewarding and promoting environmental best practice around the world.

The Environmental Agency, the Chartered Institute for Waste Management and other independent bodies support the Green Apple Awards.

You can find out more about which cookies we are using or switch them off in settings.

This website uses cookies so that we can provide you with the best user experience possible. Cookie information is stored in your browser and performs functions such as recognising you when you return to our website and helping our team to understand which sections of the website you find most interesting and useful.

Strictly Necessary Cookie should be enabled at all times so that we can save your preferences for cookie settings.

If you disable this cookie, we will not be able to save your preferences. This means that every time you visit this website you will need to enable or disable cookies again.