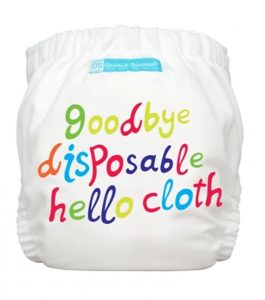 The theme of the 20th Real Nappy Week is change and it has really got me thinking about the change from cloth to disposable and the journey back to cloth.

I was a cloth-bummed child of the 70s, my mum washed in a twin-tub and line dried all our nappies, as her mother had before her. So from then there was a quiet revolution and out went the cloth and in came the paper, plastic and macrogels. Hydrogels are a new material allowing nappies to hold even more urine.

The 70s was a time of great change for women. Many were going back to work after having children. There was more opportunity for women in the workplace and there was greater mobility, so young families often didn’t have the support of an extended family.

It was in this atmosphere of change that the disposable nappy first took hold. Mums didn’t want to be perceived as being chained to the kitchen sink, and this was a product of convenience. As demand grew, prices fell. With big brands producing disposables, marketing budgets were huge and by the 1980’s, in an era of excess, the disposable nappy had eclipsed cloth.

The change from cloth to disposable had been seamless, but in the early 90s, as we left behind the throw-away attitude of the 80s, a new era was dawning. The environment dominated the media, and from this families started to think about the future of their children.

Cloth nappies quickly evolved to cater for the growing market and the terries and nappy pins were soon to be joined by funky coloured nappies that fastened with applix and poppers.   Most households had washers and dryers – white goods our parents and grandparents would have given anything to own when they were scrubbing nappies by hand!

By using cloth nappies families can make huge savings of anywhere from £100 -£1000 and the more children you have in cloth the bigger the saving.

By choosing cloth over single use nappies families could make up to a 40% carbon saving.

Something has to change!

Changing Habits: We have become accustom to buying and binning, we need to change our mindset. Buy, reuse, recycle!

Changing Futures: Change a habit of a generation and spread the word!

The Nappy Laundry Company will have discounts on cloth throughout Real Nappy Week 2016.

We use cookies to ensure that we give you the best experience on our website. If you continue to use this site we will assume that you are happy with it.Ok